The VeChain community has been eager about updates regarding the VeChain whitepaper for a while now, and today an update was announced.

VeChain is one of the few cryptocurrencies which keeps on gaining interest from companies which decide to partner up with the VeChain foundation. An extremely dedicated community has also occurred around this cryptocurrency.

But despite the team announcing huge partnerships and other related news almost on a weekly basis, there are still huge things coming for VeChain. One of those is the release of the official VeChain whitepaper.

Sunny Lu, CEO of the VeChain Foundation, recently shared with the community, that the whitepaper already is around 100 pages long, and that he has been working on it for more than one and a half months. The VeChain whitepaper is expected to be released by late May or early June, but no promises have been made.

A whitepaper is a document which explains a product, in this case, VeChain, in utmost detail. A document like this is exciting for the community because they get an insight into exactly what the plans and expected capabilities of a cryptocurrency is. VeChain has already proven that they expecting VeChain to accomplish great things, Sunny Lu even recently said that he believes that everyone will be using VeChain on a daily basis in just 3 years, whether they know they are using it or not. Therefore, it’s probably safe to say, that the VeChain official white paper will contain huge plans for the future. 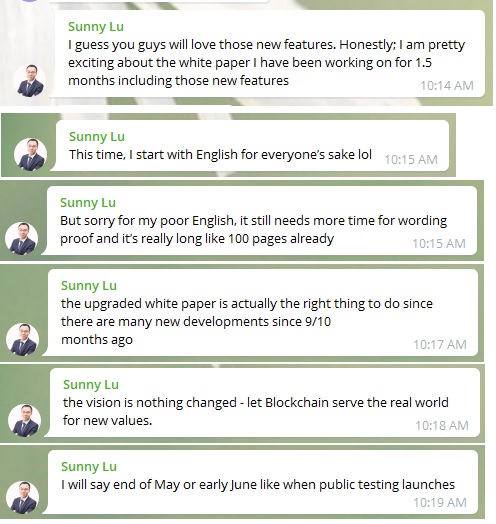 Bittrex Proves That The Cryptocurrency Thirst Is Alive & Well